If you want to explore and improve your dance skills, confidence, and personal expression with a fresh new approach, consider tuition from the UK’s leading specialist in Shway-style dance. Corina tailors all classes, workshops and programmes to individual or group requirements in an intuitive, positive, creative way.

“Shway for me is magical, because I see within its teachings how it has the power to create positive change in my students lives. I love working with people who are new to dance, especially those who think they “can’t dance” then seeing how their dance ability grows; and with it their confidence and capability of expressing themselves (which also plays out positively in other areas of their lives).” – Corina Best

Corina’s teaching style is laid-back, creating community, fun and challenge for students of all abilities, centred around each dancer developing at a pace that suits them.

The Shway classes are combined with contemporary dance principles and practice, basic fitness, music theory, and dancer psychology to develop a wide range of dance-related skills.

“My focus is on helping each dancer to explore and embrace who they are in this world, discover their unique way of expressing, and be confident and comfortable to share this expression in whatever way it shows up!” – Corina Best

Check out a bit of Shway-Style in action with Ashley Walters ‘Leader of the Dance’ video, co-choreographed by Corina and featuring her as a dancer:

Shway-Style means Waackin’ Shabba-Doo’s Way. The award-winning Choreographer/Director Adolfo “Shabba-Doo” Quiñones, “Hip-Hop’s first matinee idol” learnt from the Original Waack Dancers (aka ‘Punks’ or ‘The Garbo Boys’). He took the essence and components of that dance i.e., punking, poses, etc; and infused his styles – Locking and Soul Dance – into it. He added professional and physical dynamics not previously present in the original strain, essentially, creating a supercharged, well rounded, off shoot of the form. This is the style of waackin’ that was popularised around the world in the 1970’s and 80’s, seen on the big screen in the film Breakin’ and on popular TV including The Big Show (NBC) and Soul Train, which ran for 35 years.

From social dance to art form 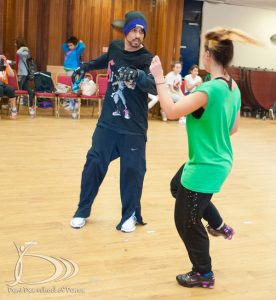 Over 35-plus years, Shabba-Doo codified and recreated the original punking/waackin’ social club dance from the floor up, pouring his blood, sweat, and tears in to making it the awe-inspiring fully developed form in its own right, that it is today. ‘Shabba-Doo’s Way’ comes with clear stylistic elements: specific techniques, teachings, training methods, and sound theoretical principles. Nonetheless, the “aim is not mastery, but creation”:

“Here’s the stark contrast, separating me from the pack; most dance teachers are seeking new students. I seek to create the next generation of dance leaders. Most teach or learn with an eye on mastering a form. I endeavour to empower dancers with the freedom and knowledge to be a creator of any dance form. Building a new generation of Legends.” – Adolfo ‘Shabba-Doo’ Quiñones.

Corina was one of the groundbreakers of the UK waackin’ scene, her journey beginning in 2008 with a curiosity for a street dance style which allowed for femininity in a male dominated culture. Corina’s intense research in the UK and abroad led her to conclude that waackin’ was a largely misunderstood style. Determined, she embarked upon a quest to bring education and accurate knowledge of the dance style to the UK in an effort to bolster the scene.

Although a founding member of the UK’s first waackin’ crew, Corina felt an inner calling for more, before long she became Shabba-Doo’s apprentice, focusing primarily on Shway-Style (Waackin’ Shabba-Doo’s Way) culminating in a leap of faith move to Los Angeles in 2012 to train intensively and exclusively with Shabba-Doo. There, she learned the complete repertoire of Shway-Style and Shway Theory, a style well suited for all street dancers.

Back in North West London, Corina now delivers tuition and classes as a fully certified Shway Instructor with comprehensive, practical knowledge, complete with an enhanced set of dance teacher skills and a keen understanding of Shway’s essence as well as the artistry of the dance form and the freestyle expression that it incorporates.

The difference between Corina’s classes and every other class I have been to (which is a lot), is dance is more than a passion to her, and a lesson is not just a dance lesson where you learn a routine and how to improve.

You really should join Corina’s classes, not only for the chance to gain exceptional skills and training in dance, but also allowing yourself to train to gain confidence, be a part of a family, embrace who you are and to help you be a better, more refined version of yourself while learning that you can only be the best you can so should never compare yourself to someone else.

See one of our end-of-project dances here: